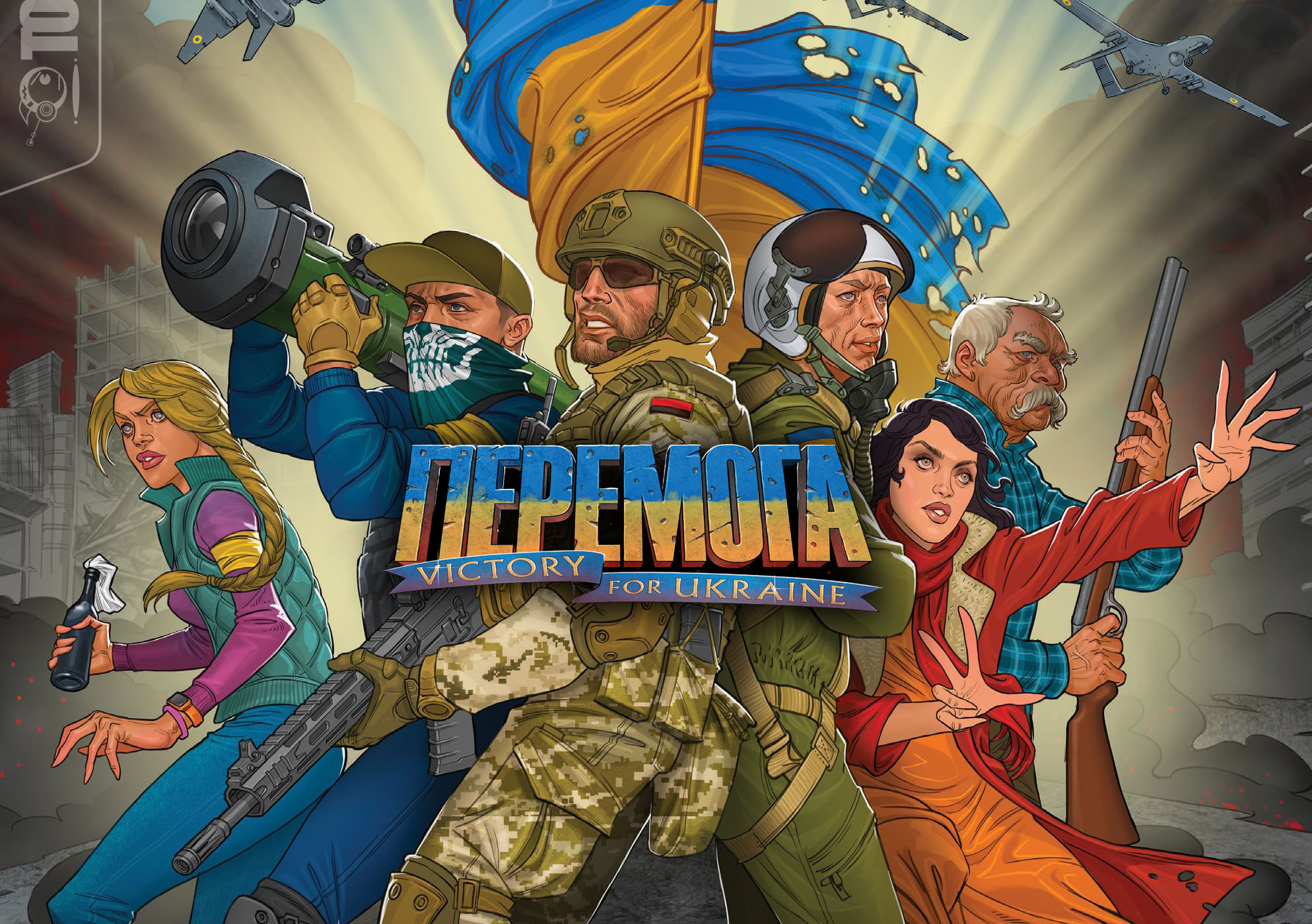 August 24th, marked the anniversary of Ukraine’s independence (in commemoration of the Declaration of Independence of 1991), and in honor of the occasion, manga publisher, TOKYOPOP is proud to announce, ПЕРЕМОГА (PEREMOHA): VICTORY FOR UKRAINE, a new full-color graphic novel anthology by Ukrainian creators that debuted digitally on August 24th with a print release on September 27th 2022.

You purchase the graphic novel in digital or print format here:

A portion of the proceeds will go to Razom for Ukraine – (“Razom” meaning “together” in Ukrainian), a non-profit Ukrainian-American human rights organization established to give direct support to the people of Ukraine in their pursuit of a democratic society with dignity, justice, and human and civil rights for all.

A web landing page for ПЕРЕМОГА (PEREMOHA): VICTORY FOR UKRAINE also has been created by TOKYOPOP, that features a heartfelt, personal message from TOKYOPOP founder, Stu Levy, as well as excerpts and bios for the creators. All that and more here.

About ПЕРЕМОГА (PEREMOHA): VICTORY FOR UKRAINE;

The war comes to readers (for ages 12+) in nine stories that humanize the conflict in Ukraine in a unique and emotionally lasting way with a focus on the heroism of the Ukrainian people and military in the face of overwhelming forces. Witness the struggles of brave defenders in cities like Kiev, Mariupol, Kherson, and Snake Island, and how the utter insanity and irony of the war is told from the standpoint of a looted Ukrainian washing machine, and a humble farm tractor that wants to steal Russian tanks.

What if your family, your hometown, your entire way of living were threatened by force? That’s what the people of Ukraine faced when Putin’s Russian army invaded their sovereign land, displacing millions of refugees and causing an international crisis threatening democracy across the globe. But the Ukrainian people refused to cave – and these 9 stories weave the greater tale of their resistance – and fight for Victory!

The stories in PEREMOHA: VICTORY FOR UKRAINE include:

Episode 1: The Ghost of Kiev – the now legendary story of an invincible ace Ukrainian fighter pilot – the Ghost of Kyiv – a man who protected hundreds of thousands of Kyivans, their children and homes during the first 30 hours of a massive attack on the city when he shot down 6 Russian planes

Episode 2: The Witch – Witches hold a distinct and storied place in Ukrainian culture. Witness how Russian soldiers bent on terrorizing the civilian population find more than they bargain for when they meet a vengeful Ukrainian witch on a deserted road.

Episode 3: Azov-Stal – This story is about the Azov regiment, the marines, border guards and policemen; who held out against incredible odds in the long-suffering city on the shores of the Sea of ​​Azov; about the people who became hostages of the bloodthirsty military machine of the Russians.

Episode 4: Looters – The looting of the Russian army and the ironic fate of a Ukrainian washing machine

Episode 5: Zmiinyi Island 13 –The now iconic battle for Snake Island, where a band of brave Ukrainian solders defied the Russian navy and the proclaimed the legendary phrase that the world now knows – “Russian Warship F…ck Yourself.”

Episode 6: Throughout the Centuries – Ordinary Ukrainians take up arms against the Russian army using ancient earthen ramparts called the Snake Walls, built during the time of Kyivan Rus by Princes Volodymyr the Great and Yaroslav the Wise in the 9th and 10th Centuries to defend their lands from attacks from the southeast by nomadic tribes. In WW2, they were part of the defense lines against the Nazis and today they have helped to slow down and menace the advance of the invading Russian army.

Episode 8: Cyber Kherson – An inspiring story of a new breed of Ukrainian rebels using technology to continue the struggle for democracy under brutal Russian occupation in the city of Kherson, located near Crimea and the eastern Donbas region.

Episode 9: The Price of Victory – How ordinary people in Ukraine went to war to defend their home, families, freedom, and fight for the right to live in their own free country and determine their own futures.

“VICTORY FOR UKRAINE grew out of tremendous upheaval caused by the invasion and my personal experience hosting some displaced families at my home in Berlin where I now reside,” says Stu Levy, Founder/CEO of TOKYOPOP.

Levy continues, “As I learned more about what was happening, we connected with the talented Ukrainian creators, artists and writers that brought the book to life. These stories are vignettes, originally created and published to inspire the people of Ukraine, but they will leave a lasting impression on readers around the world. The stories are steeped in the realities of the war but depicted in a very relatable way. We invite readers to discover this book and to stand for victory and freedom with the people of Ukraine.”

You can purchase the digital copy or preorder the print version below,