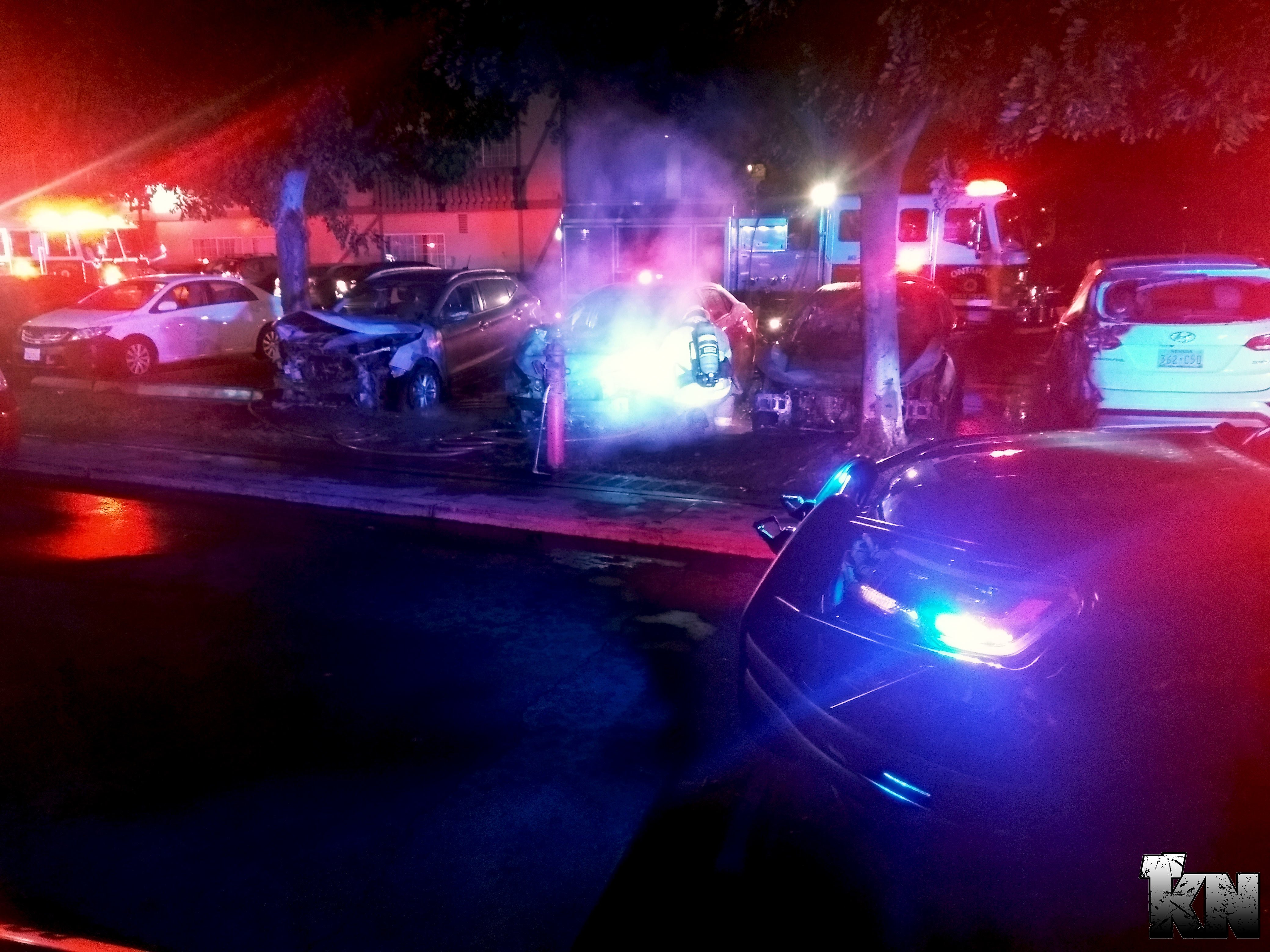 We usually see pretty crazy things that happen at anime conventions in general, but on early Sunday morning at around 1:30AM, Anime Los Angeles attendees, alongside other non-con hotel residents, woke up to what was initially thought of as an active shooter situation at the Folk Inn Hotel in Ontario, CA.

It was later discovered that it was not an active shooter situation but rather, an arson fire that destroyed a total of SEVEN cars.

Both the Folk Inn Hotel and its neighboring hotel, The Azure Hotel & Suites were evacuated, however, According to eyewitness Nora Moto, who staying at the Azure Hotel, employees, as well as hotel residents, were knocking on doors advising people to leave and evacuate their rooms immediately. Nora Moto told The Kitsune Network, “People were panicking because they thought it was an active shooter[…]the fire burst the tires and people thought someone was shooting up the place.”

Nora added that the initial reports of an active shooter caused mass panic inside the Azure Hotel lobby causing people to run out into the streets, some going towards the Gateway Hotel, adjacent to the Ontario Convention Center, to stay away from the “active shooter”.

We were able to speak to a police officer after the fire was out, the officer at the scene told us that, a person of interest was detained by police. An eyewitness saw individual pouring gasoline on ONE car and then setting it on fire, the fire then spread to the adjacent cars. The individual then sped off in an unidentified car, but not before the eyewitness was able to record their license plates number.

According to ABC 7 news:

“surveillance video[…]showed a man walk up to the main vehicle, pour two cans of gasoline all over it and then he flicked a match on it. The manager said the match didn’t start the fire, so the man in the video then pulled out his lighter to set the vehicle ablaze.”

27 year old, Matt Masumi Toyotome, an Anime Los Angeles attendee, is currently in custody and in the West Valley Detention center on suspicion of arson. His bail is set to $250,000.

Sources have told us that, Matt Toyotome targeted a 2015 Subaru Outback belonging to fellow con attendee, Julia Moreno Jenkins, whom Matt had an obsession with for years. Authorities were able to arrest Matt at his Riverside home shortly after the fire without incident.

According to a friend of the victim who has chosen to remain anonymous, Matt had been harassing Jenkins for about 3+ years prior to this incident. The feud began when Matt, Julia, and a group Power Ranger fans created a fan-made YouTube series titled, Armored Rangers.

It was during the production of this series that Matt developed an obsession with Jenkins, even though Jenkins had been in a relationship since 2013. When the series ended, the group went their separate ways, however, Julia stayed on the YouTube scene with another series and became well known in the Power Ranger community.

Our source added, that Matt was not only obsessed with Julia but also, jealous of her new found fame with the new YouTube series. Over time Matt began to express his feelings for Julia and began harassing her by going to her house uninvited, dropping off gifts and following her around conventions.

It is unclear on what specifically made Matt commit this act, however, is it speculated that Matt’s advances toward Jenkins were rejected during convention prompting the attack.

Julia was not the only one affected by Matt’s actions, several of the other vehicles belonged fellow ALA attendees, such as Sabrina Snowdon whose, 2017 Nissan Rogue Sport [seen below] was completely destroyed.

“I only had liability insurance, so my insurance will not cover me and I got it for $27,000. It was a really good working 2015 Subaru Outback. [. . .]I appreciate everyone who has helped be here for me during this ordeal, and thank you all for encouraging me to go through with starting a go fund me. I can’t say thank you enough for the cosplay community being so supportive and helpful to me in just every way.” – Julia Jenkins via Go-FundMe

Jenkins, as well as those whose car was affected, have since created donation accounts reaching out to the cosplay community for help.

For those who wish to be donors and help out the victims of this horrible crime, you can do so by clicking any of the following donation links below:

[We’ll be updating links as more information is released.]

[PHOTOS] Aftermath of the car fire: